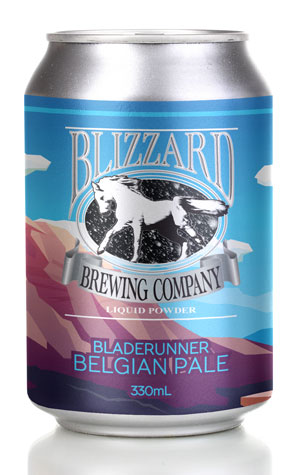 Having cut their teeth when it comes to producing Belgian influenced beers at their Dinner Plain home in the company of fellow High Country brewers for the 2016 Rule 47 collaboration, Blizzard has gone back for a second helping. Bladerunner uses the same specialty Belgian yeast but changes things up elsewhere by adding a bit more wheat and some rye too.

Initially a summer seasonal, with a name and packaging inspired by a local cross country and walking trail of the same name, it maintained the brewery's prolific start to life: their ninth different beer brewed in nine months after opening the brewery. It went on to pick up an award at the Ballarat Beer Festival in 2017 and a silver at the AIBAs and has become a regular fixture in the lineup since.

It's a beer with plenty going on, from tropical fruit through rich caramel malts to light, peppery spices and a touch of honey on the nose. It's full-bodied and textural on the palate with a gently warming finish and a slowly rising bitterness completing the picture.

We're told the beer is "medium bodied pouring a rich golden orange hue" with malt characters of the biscuity variety with "a backbone of spice derived from a healthy percentage of rye malt". The brewer tells us you can also expect aromas of "passionfruit, melon and stone fruit balanced with low peppery, floral, woody characteristics".