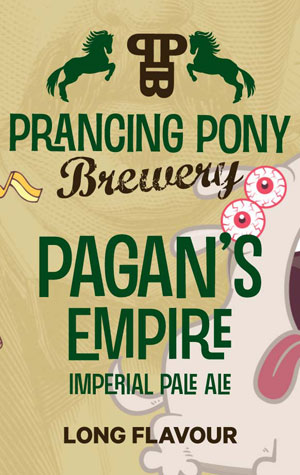 To introduce Prancing Pony’s core range IPA, Pagan’s Empire, we need to wind back the clock. Back to a time when dogs were only just beginning to be domesticated, men would hit the paddocks to provide for the family and the women would stay at home and brew beer, among other things. Spelt and rye were common ingredients were typically unrefined compared to those we enjoy today. Not that we're saying Pagan’s Empire is unrefined; rather these old methods were the inspiration for the beer.

Labelled an imperial pale ale, 25 percent of the grain bill is made up of rye malt, while Pagan’s Empire has been heavily hopped at various staged with three different American varieties. A gentle tangerine, grassy hop aroma begins the Pagan’s Empire journey. It's a beer that pours a burnt orange colour with a nice, off white head and full, thick mouthfeel, thanks in no small part to the liberal use of rye malt. It's an Empire that fights on well after the last sip too thanks to a big, punchy bitterness.