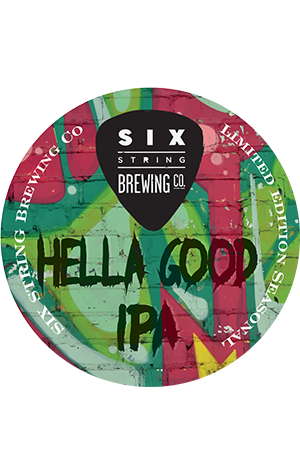 While their lagers, pale ales and otherwise generally approachable beers have made them legends with loads of friends in their local community, the brewers at Six String are never afraid to give the flavour dial a decent twist to the right to cater for those who enjoy giving their palates a bit more punishment. That’s seemingly the target audience with their Hella Good IPA, a beer that first came out as a keg only release at the beginning of 2017 but which they felt warranted a re-release a year or so later and, this time, in cans too.

You’ll notice at first with this beer that there’s a helluva lot of tropical and citrus character packed in here and these marry up with the malts to show something of a sweet side. But it’s the back end of the palate that leaves the lingering impression thanks to a touch of alcohol heat, a lengthy bitterness and hop characters that err towards the peppery and spicy end of the spectrum.

It’s pitched as an easy drinking IPA which, at seven percent ABV, means you’ll need to read between the lines a little to figure out what that might mean to you; if you’ve never ever let a hoppy beer pass by your lips before then this beer could quite easily be an affront to your senses, but if you’re a regular hophead you’ll have little trouble – and no doubt a hella good time – cracking your way through a can or two.