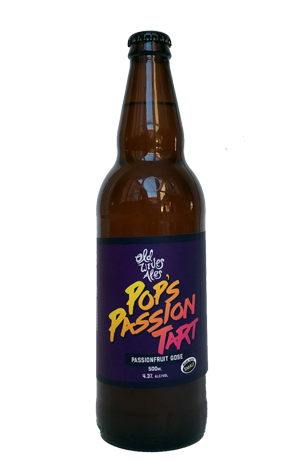 As one of Melbourne's more prominent gypsy operations, the Old Wives Ales crew is used to collaborating – how else would they get their beers brewed, after all? This time around, however, they brought an extra collaborator into the mix. One of the key characteristics of a gose, the German style that's risen to prominence in the craft beer scene with astonishing speed, is a level of saltiness. So it's hello to Smalt, producer of cold smoked salt and supplier of some apple wood smoked salt for Pop's Passion Tart, Old Wives Ales' first gose and first beer to be released in hand numbered 500ml bottles.

As the name suggests, they didn't stop at salt either. Having soured the base beer in the kettle, they added pure passionfruit pulp too. And it's the last of these ingredients that raises its hand first – pouring the beer into a glass is akin to slicing into a passionfruit. The fruit subsides over time, however, with acidity and that salt coming to the fore, while to taste there's some earthy, sweaty, salty sourness at play too. Indeed, compared to some other recent fruit sours released locally, it's more puckering and feels like more of a gose gose than those that rein in the funky underbelly to let the fruit reign alone.