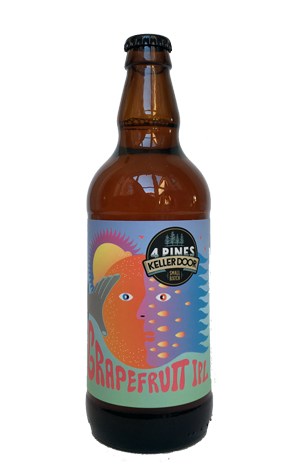 It's fair to say that, when it comes to their core range at least, 4 Pines presents itself to the world in a pretty safe and straight down the line manner. It's somewhat at odds with the personalities we've got to know at the brewery and the giddiness with which they approach many of their other encounters with the beer drinking public. Instead, it looks like their now regular Keller Door bottle releases are where that personality is allowed to poke through, with a series of labels that could have come out of Haight-Ashbury in the late 60s continuing with this Grapefruit IPL.

The beer comes inside a bottle adorned with a label that melds psychedelia with something you might expect from one of Scandinavia's more out there brewers. Meanwhile, on the inside, it continues the brewers' preference for loading Keller Door releases with hops. And, in this case, ruby red grapefruit.

Thus heaps of juicy grapefruit, backed up by pineapple, leap from its bright golden body, paving the way for a distinctly resinous, biting and pithy bitterness, not unlike a sharp citrus marmalade. There's some sweet malt there to offer a semblance of balance, but the hopping is aggressive enough that bitter hop flavours still rule the day.