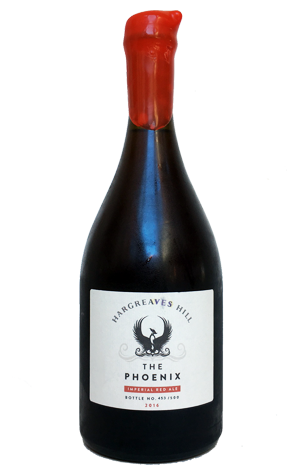 You don't have to look too hard to find pretty much every sort of beer imaginable on a bar, in a fridge or on a shelf these days. But, as Berliner Weisse and gose chase IPA as the biers du jours for the craft cognoscenti, you have to delve deep into the Rolodex of the mind to recall many beers like Hargreaves Hill's Phoenix. The imperial red ale was first brewed to mark the brewery's resurrection after the original site was destroyed when the Black Saturday fires swept through the Yarra Valley.

It's become an annual release since and feels like something of an elder statesman of the local beer industry, and not just because it's a special release that's been around longer than most such beers (it predates Clout, for example). It looks stately, what with its red wax sealed hat, heraldic label and weighty 750ml bottle. And it is glorious – vibrant even – in the glass.

Dip below the surface and you'll discover specialty malts of a richness that hints at strong Belgian ales, or an old sherry, and a dense marmalade character; fruity hop aromas do their best to get noticed too. There's a touch of spicy, prickly heat and, at its relatively young age at time of writing, the hop bitterness is prominent, presumably to provide the ballast required to allow it to age and develop complexity over time for those patient enough to pop a bottle in the cellar.