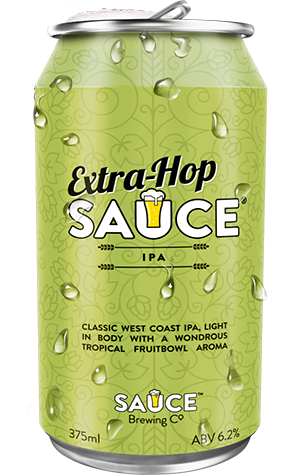 Beer number four from Sauce brewing, and number three in the core range, is one that neatly plugs the gap in founder Mike Clarke’s thus-far hop-forward repertoire; first there was the Mega-Hop Sauce double IPA, then he pulled things back somewhat with the Hop Sauce pale ale, now we have Extra-Hop Sauce, a West Coast IPA.

It’s a punchbowl of a beer, filled with big tropical fruit characters, especially pineapple, and a resinous kick. While the fruitiness remains throughout and mingles well with the malt sweetness, it’s the bitterness that is most memorable. Being a WCIPA it’s necessarily got bite but it’s all lean and dry and well balanced which helps keep it from seeming overly aggressive. At 6.2 percent ABV it is a beer that has the potential to bully you about a bit, but such is the extra value you get from the flavour that you’ll probably be quite content to stop after a couple and still be tasting it well after your last sip.