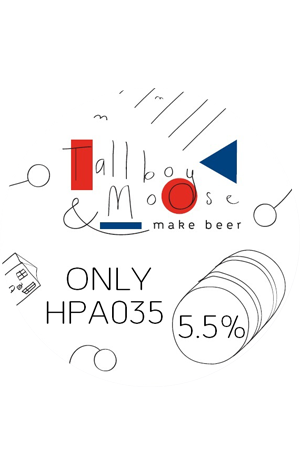 Aside from the brewery's Cream Ale, Only is the closest that Tallboy & Moose comes to a core beer. It's a series that retains the same pale ale style base but features a different single hop in each brew. This time around, it's one of Hop Product Australia's (HPA) more recent "experimental" varieties (the use of speech marks here is due to it being an experiment that has been supplied to a rather large number of breweries around Australia for the past couple of years, suggesting it may well soon have a proper name and enter the Tassie-based grower's permanent lineup).

In all the beers to feature it that we've come across to date, none has demonstrated this side of its character so boldly. According to the duo at the Preston brewpub, they found it to be pretty delicate, so much so that it was hard to discern much character when they'd exhausted their initial supply. So they contacted 3 Ravens down the road, picked up some more, lobbed it all into the beer and, well, let's just say it wasn't what we were expecting. It gives this iteration of Only distinct liquorice, aniseed and dark berry characteristics, suggesting it may ultimately be a hop to use in darker beers, in a blend or, as Steve "Moose" German suggests, a spicy saison.

Certainly, if you want to see just how diverse an impact hops can have on a beer, it's worth heading along to Tallboy & Moose before it becomes a case of "If only...".