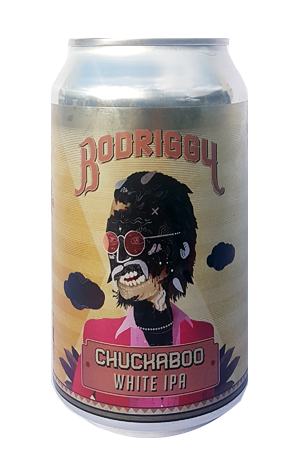 The first Bodriggy beer to start appearing on taps – or, more accurately, peering from above them via the brewing company's distinctive decals – was the pink jacketed Chuckaboo. And it isn't the sort of beer too many breweries will have chosen as a lead product before them: a white IPA.

For those unfamiliar with such a style, it's one in which the spicy, citrusy characteristics of a witbier yeast are combined with the sort of heavy hopping regime found in an IPA. They can often be quite a mouthful, pushing out against the palate in multiple directions. But here, despite not holding back on the tropical and citrusy hops – Centennial (US), Melba (Aus) and Motueka (NZ) if you're taking notes, Bodriggy delivers a beer that has the expected fruit and spice action going on yet keeps things wrapped up in a tight package. In fact, it's the sort of beer a left of centre brewing operation might consider for a lead product...