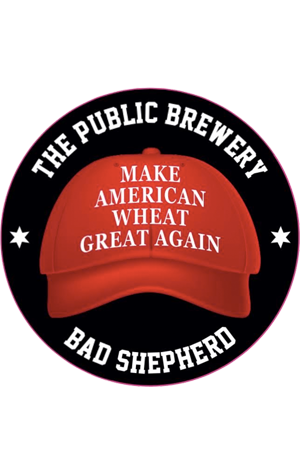 Depending where you exist on the political spectrum, you may feel that The Donald's rise to the pinnacle of power in the US offers little that could be regarded as good. That said, he's been a godsend to satirists and the wider world of humour (intentionally and otherwise), with his impact even being felt in the Australian beer world. Such as here, where The Public Brewery and Bad Shepherd got together to make a beer: an American wheat that borrows its title from his campaign slogan and its decal from his Chinese manufactured baseball caps.

For those wondering what an American wheat is, cast aside thoughts of cloves, banana, coriander or other spices found in Belgian and German style wheat beers; these are beers featuring plenty of wheat but a "clean" yeast that doesn't throw out such characters. This one is described as a "fresh, easy drinking and hoppy", with those hops coming in the form of Galaxy, Ella and Crystal hops.

It's being launched simultaneously at both venues, at Date Night (where there's a free beer for Crafty Cabal members) and at The Public Brewery's third birthday party.