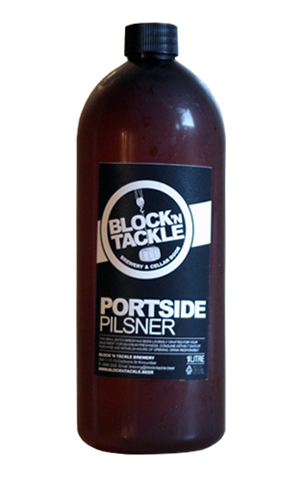 One of the quirks of pilsners is that they’re so widely consumed globally yet relatively few craft brewers pay them much attention. And, if you should come across a craft brewery that releases a pilsner, you’ll often find it’s amongst the least talked about beer in their range. Try as you might – and you can throw the thesaurus at it – there are few sexy or unique selling points to a beer whose general existence is derived from a quest for subtle flavours and fine balance. Yet those very points can make drinking a good pilsner one of the most rewarding beer experiences one can have. Indeed, being cold, crisp and quenching, it could be considered the archetypal Australian beer.

The Central Coast’s Block ’n Tackle brewery has seemingly taken this to heart with their new Portside Pilsner, a beer made entirely with Australian malt and hops. The malt does everything you'd expect, including adding a welcome touch of breadiness, while the Ella hops give it a light spicy character and help it go a notch above the classics of the style on the hop front. It’s not in the fruity realms of the popular New Zealand pilsner style but there’s certainly more impact on the nose, which combines well with a pleasant and lingering bitterness.

Indeed, Portside Pilsner is a most agreeable and well balanced beer that ought to please everyone – even if no one talks about it.