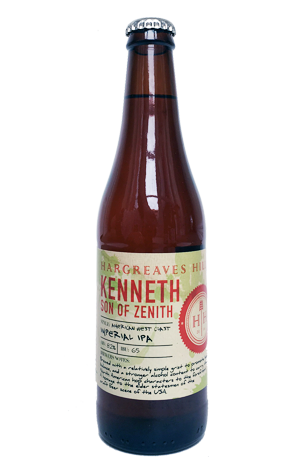 We got into a spot of bother with Hargreaves Hill a few years back. They were releasing an IPA and told us it was called Melanie, so we published the beer under that name. Turns out that was an in-house in joke as the character was rather melony. Still, by the time we discovered this, the beer was already listed on rating sites as Melanie IPA, much to the brewer's chagrin.

Roll forward to today and we're happy to say that this double IPA from the same brewery is indeed called Kenneth – it's written on the bottles, after all. And the name does again arise from some in-house jesting; their core range IPA is called Zenith so, in a nod to Pliny the Elder and its bigger relation Pliny the Younger, they went with Kenneth, son of Zenith. And by the time the beer was ready the name had stuck.

The beer itself is built of similar parts to Zenith, but beefed up, which means it's based around North American hops that lend it predominantly piney, tropical characters, which share stage time with sweet caramel malts, particularly in the aroma. The hops deliver more in the way of hop flavour than an intense bitterness too.