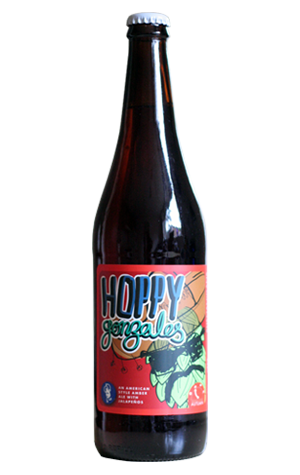 When it first came out midway through 2015, as a one-off release in Shenanigans’ Stunt Beer series, Hoppy Gonzales was something of a surprise hit. A surprise because it offered such a big hit of chilli wrapped neatly around what was loosely described as a hoppy American ale. Anyhow, drinkers loved it and the brewers suggested they’ve been pestered about its return more than all but one of their other single batch releases over the past three years (Imperial Winston being the other, if you’re one of the ones doing the asking).

But you can understand why they might be reluctant to bring it back, considering its preparation requires a significant percentage of a day spent chopping chillies. That’s hardly fun and it’s certainly not romantic, yet when the decision was made to bow to public pressure and bring Hoppy Gonzales back as the new autumn seasonal, fate determined that brew day would be on February 15, which in turn meant the preparation had to be done the day before: Valentine’s Day. So it was that brewer Sam and his partner got dressed up in their sexiest rubber gloves and safety goggles and spent an intimate Valentine’s Day chopping their way through tens of kilograms of chillies. True love, that is. But it was worth the effort.

Hoppy Gonzales versión 2.0 is a faithful reinterpretation of the original beer, complete with that standout aroma which threatens plenty of jalapeño heat but on the palate isn’t even close to scary; it’s got more capsicum character than straight up spiciness, with just a hint of smokiness. Beneath that are the bones of what would be a fine standalone amber ale, built largely on Columbus and Mosaic hops. Anyone waiting years for the beer to come around again won't be left disappointed. And if you missed it first time around, now’s your chance to put a bit of fire and spice in your life.