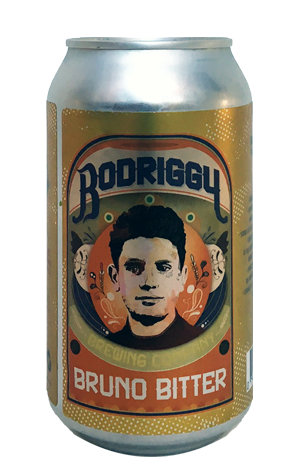 Bodriggy Brewing will, at some point, have a brewery inside the building that housed Victoria's first automatic carwash and what was at one stage the largest Auto LP conversion business in Australia. "So what?" you may well ask. Well, the new lessees of the space across the road from their bar, Dr Morse, are keen to pay homage to the building and its former inhabitants. One of those was Bruno, a man who emigrated to Australia from Italy in the 1950s, once invented a device that powered a motorbike with pig shit, and who set up in business in Abbotsford at 245 Johnston Street where he worked every day until 2014.

The beer that bears his name is the brewing company's first tinnie and a beer designed to be their all weather friend. We approached our first expecting something totally stripped back and close to, say, a Melbourne Bitter – a legacy not just of the name but of the brewing company's associations with the music scene. Yet, while it's not going to knock you sideways, it brings more to the party: there's stone fruit, lemon citrus and soft peachy tropical characters to be found in this hazy golden drop, not to mention a sherbety pale malt sweetness, creamy texture and building bitterness.

Chances are good that Bruno will be happy with those taking his former home in a new direction.