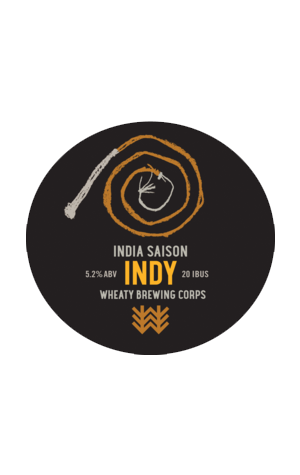 When thousands of homebrewers descend on your home town for their large annual conference, you're almost duty bound as a busy brewpub operator to create an interesting beer for them. ANHC 5 took place in Adelaide in 2016 and, as a major sponsor, the Wheaty Brewing Corps was put in charge of brewing the official beer. Pilsner, wheat, flaked oats and acidulated malts met Magnum, Amarillo, Nelson, Citra and Simcoe hops with the final piece to the puzzle being the White Labs French Saison yeast from the US. The result was Indy, the Wheaty Brewing Corp’s 75th different beer in just two and half years of brewing.

It's a highly aromatic beer with punchy grass and pine hop aromas derived from the high alpha acid hops added in the whirlpool and at the dry hopping stage. It's also a bright, hazy, straw coloured saison: a blend of two styles, hopped like an IPA but drinking like a dry saison with a lingering creaminess.