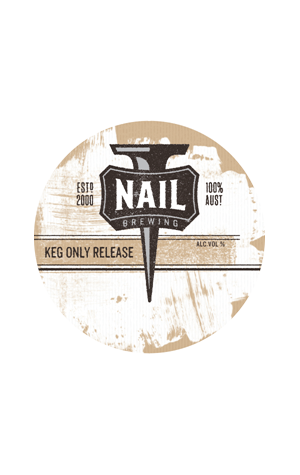 This imperial porter, named after one of Nail founder John Stallwood's sons, has quite the genesis story. For starters, it wasn't supposed to exist and only came about when John was brewing what was intended to be that year's vintage of his iconic Clout Stout. The first two brews didn't quite hit what he deemed to be the right level of Cloutishness so were instead blended together. And the result wasn't too bad. In fact, the Clayden Brew imperial porter was pretty damn good, picking up a swag of medals and trophies of its own.

It's been a while since the beer has been seen (other than in the fridges and cellars of very patient people – the last one at Crafty Towers met its demise sometime last year). But now it's back – bigger than before – in draught form with a promise that it will become an annual release. We've not tasted this one yet as it's only just come out in Nail's home state but, given John's pedigree with big, dark beers, expect it to be worth hunting down what they're describing as "full of chocolate notes with a well balanced sweetness intertwined with subtle bitterness from Goldings hop character."