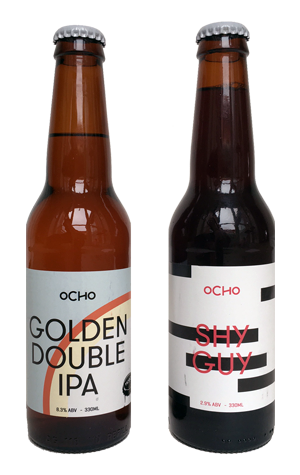 Earlier this week, we described Moon Dog's latest duo of limited releases as a yin and yang pairing. And it's a description that can be applied to the first output from Tassie-based Ocho in 2017. Here, you've got a beer that's as pipe and slippers as they come and another that's very much part of the zeitgeist.

The former is Shy Lad, an English dark mild, the sort of beer you might find older gents cradling by the fire in a cosy Dales pub. By local categorisation, it clocks in as a light beer at sub 3 percent ABV. In terms of character, it's very much about the malt: dusty cocoa, a touch of roast, rich tea biscuits and a dry, bitter chocolate finish make up a beer with lower carbonation than is typical of Australian beers.

As for the Golden Double IPA, a beer that went down a storm when it appeared at the Tasmanian Pint of Origin venue at Brewsvegas, it's the polar opposite. The malt is there to provide little more than a slightly sweet base upon which a combination of Idaho 7, Citra and Simcoe bring the party: juicy, sticky orange and apricot aromas, heaps of hop flavour and a zesty, Olde English marmalade like bitterness.

UPDATE: The Golden Double IPA proved so popular it's become one of few Ocho beers to get repeat runs and, from batch two onwards, now comes in cans. And, if batch three is anything to go by, it's become a hazier, softer affair, at least up front, before it drops a blanket of resinous bitterness over your palate.