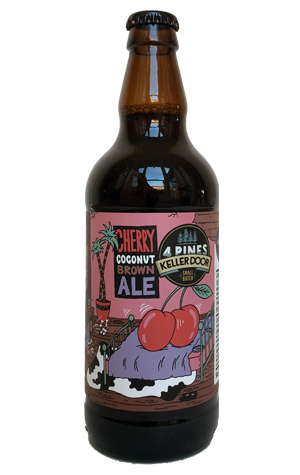 There's a few reasons why we don't score or rate beers on The Crafty Pint. Among them is an acknowledgement that everyone's palate differs; we might not appreciate a deliberately out of balance, tongue-strippingly bitter DIPA but that doesn't mean it's not what the brewer was aiming for or that there won't be plenty out there who will lap it up. So, other than the instances in which we've been sent a beer that's clearly faulty, in which case we contact the brewer direct (when variously we've been sent another sample, the beer has been withdrawn, they've discovered a fault in the brewery or comments are ignored), we look to tell the beer's story and aim for the descriptive rather than subjective. Sure, there are times a beer's so good we can't help but get a little excited, but we prefer to let readers decide if a beer sounds like their kind of thing.

Which is all a long-winded way of getting to 4 Pines' latest Keller Door release. Usually, whether it's another highly hopped India something-or-other, a darker drop or a multi-pack affair, the arrival of such beers at Crafty Towers are a cause for excitement. But with the words "cherry" and "coconut" in the title... less so. Let's just say, despite being into a fifth decade as a weak-willed, sweet-toothed sugar fiend, the number of times a chocolate bar bearing such words on its packaging will have made its way from shelf to pocket is a big, fat zero.

However, in the spirit of objectivity, we can tell you it delivers on its promises. Macerated cherries lend a reddish hue to the head, while the roasted coconut dominates the aroma and adds extra creaminess to its soft, chocolatey, malty body. The cherries add a sharpening tang too in a beer that will no doubt have many salivating – and even provides something of a warm up for next month's GABS festival at which such beers will no doubt make their presence felt on the container bars. But, if anyone would like the second bottle sent to Crafty Towers, it's yours!