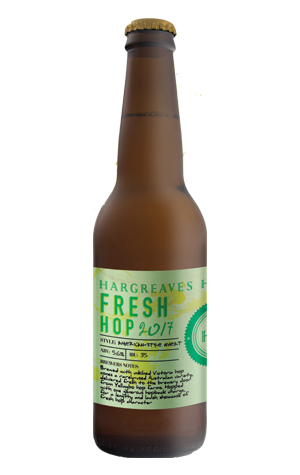 At last month's Fresh Hop Beer Festival in Launceston, the vast majority of brewers who launched beers at the event took advantage of fresh hops from Hop Products Australia's Bushy Park farm. There were exceptions: Seven Sheds used their own Fuggles hops and Hargeaves Hill hooked up with Brad Merritt of Yellingbo Hop Farm, a small operation located in the hills to the east of Melbourne.

One of the varieties Brad has been focusing on growing is Victoria, which was developed by HPA but dropped from their program a few years ago, then kept alive in homebrewing circles. And that's what has gone into Hargreaves Hill's 2017 harvest ale – delivered fresh and unkilned to the brewery to be added to an American wheat ale – in other words, a relatively pale and unobtrusive base beer upon which the hops could hog the limelight.

It was one of the beers winning plenty of admirers from those we spoke to at Fresh Hop, one that offered up plenty of fresh tropical and citrus aromas and flavours – perhaps unsurprising when you know Victoria shares a lineage with Galaxy.

And select bottleshops around Victoria