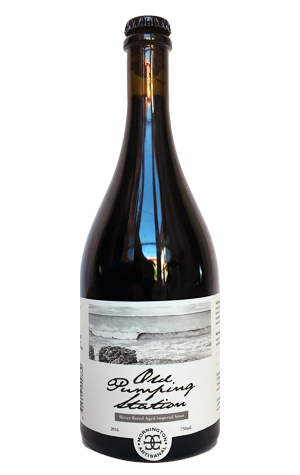 Mornington Peninsula Brewery's Imperial Stout is one of the finest beers of its kind you can get your hands on in Australia. The beer picked up a trophy at the Australian International Beer Awards in 2013 and, especially with a bit of age on it, is a treat in which those who appreciate luscious malty beasts can wallow at length. So how do you improve on that?

Meet Old Pumping Station, a beer named after a Mornington Peninsula surfing spot, packaged with cork and cap in a 750ml bottle adorned with artwork by local artist Josh Brown. It's quite the way to package a beer but as it's the brewery's way of introducing its barrel program to the world, why the hell not?

Inside is what started out as the brewery's Imperial Stout before it spent time inside locally sourced Shiraz barrels. Once it's outside, it's still a beer that will be familiar to those who've had the patience to hold onto bottles of the standard winter release – but with added deliciousness. Accompanying the layers of dark chocolate fudge, it's picked up hints of cherries and berries from the oak's previous resident, while the opulent nature of the beer's mouthfeel has been ratcheted up a notch or three too.

We don't tend to pass comment on beers, preferring to describe and let you make up your own mind. On sharing this with friends the other evening, however, we took to Instagram within a couple of mouthfuls. "Nice work, @mpbrew – this is sensational."

And other good beer stockists in VIC, NSW & QLD