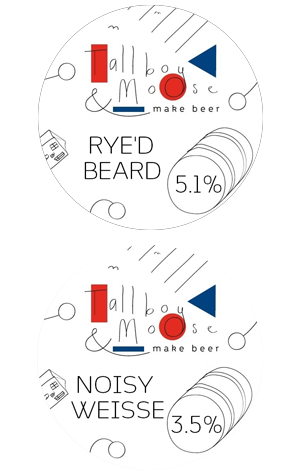 Such is the rate at which Tallboy Dan adds new beers to the list at the brewpub he runs with Moose Steve, it can be hard to keep up. So it is that, despite the fact brewery isn't that far from Crafty Towers, we've not managed to get our hands on this pair of new releases. So we'll leave it to the duo to tell us what's what.

Rye’d Beard is "built around a heap of malted rye. Unique French hop Barbe Rouge gives it a red berry/red liquorice twist and altogether the beer has a subtle spiciness and BIG winter body."

As for Noisy Weisse, the brewery's first kettle sour – one they're "very proud of", they tell us: "We borrowed some Shiraz grape juice from our friends at local urban winery Noisy Ritual in Brunswick and added it to the whirlpool post-kettle souring. The impact is both massive and subtle. It’s turned the beer a vibrant pink colour, and added a vinous fruit flavour that works perfectly with the tart, dry qualities of the base beer."