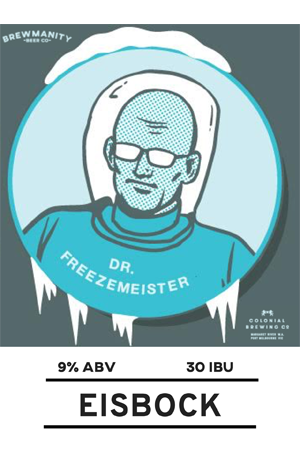 Brewmanity's Good Beer Week and GABS special releases for 2017 couldn't be much further removed from its Social Beast. For a start, Dr Freezemeister is twice the strength of their Australian pale ale. And, while Social Beast puts hops front and centre, this limited release draught beer is all about malt, booze and, well, ice.

It's a take on the German Eisbock style created in collaboration with Colonial and inspired by Big Freeze events for which the base beer was partially frozen to increase its intensity and alcohol level. We sampled it pre-freeze from the tank, at which point it was already viscous and all about the sweeter malt characters. We're told the finished beer delivers caramel and banana, while there's a barrel aged version, Whiskey on Eisbock, that debuts at GABS 2017. A portion has been left in the Starward barrels a while longer and should appear in bottles later in 2017 too.