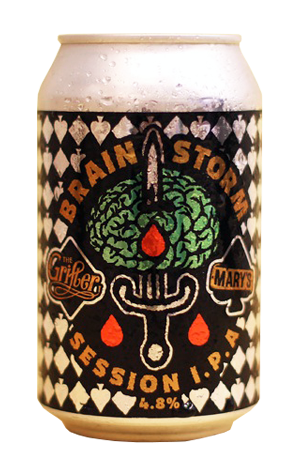 In a city where burgers have steadily become an obsession, it says something about Mary’s that they’ve managed to keep their effort at the top of Sydney’s list for a number of years. It probably helps that their Newtown home is dark, loud and full of great booze, creating the perfect environment for devouring a cracky stack of goodness between two worryingly deliciousness buns. In an effort to come up with the ideal accompaniment for their American style cheeseburger (or perhaps just because), they teamed up with the folks down the road at the Grifter Brewing Company on an American style beer.

Brainstorm is a session IPA flush with Citra and Mosaic hops and it was actually released for the first time as a keg only beer for the venue at the start of the year. But with the brewery’s new canning line bringing about the opportunity for a packaged re-release, you can now have the beer and burger combo whether you’re eating in or taking away. Heck, you don't even have to have the burger if you don't want to. But of course you know you will.