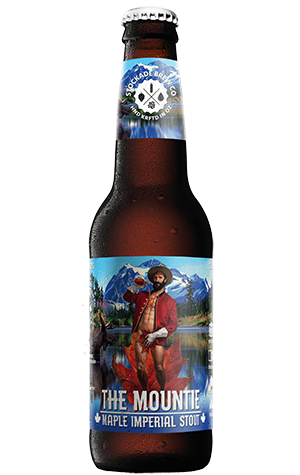 Browse the lists of top beers in the People’s Choice competition at the GABS festival in recent years and there’s a common thread: sweet stouts. That’s understandable. In a lineup of more than a hundred often unusual beers, it tends to be those high in alcohol or sweetness that linger in the memory a little longer – especially when sampling via 85ml tasters. With that in mind, in preparation for the 2017 festival it’s easy to imagine the Stockade team sitting down to come up with a recipe, throwing around a bunch of ideas before deciding to just make the strongest and sweetest beer they could. And, boy, did they do that.

The Mountie is a 12 percent ABV imperial stout infused with maple syrup, complete with eponymous Canadian baring his 12-pack on the label. It’s based on the stout recipe that won them a major trophy at the World Beer Awards in 2015 so they knew it would stand up on that front. But what has the maple bought? The answer is sweetness, and shitloads of it. The unmistakeable maple aroma roars up at you from the glass, like sitting at a cafe and being presented with a stack of pancakes and bacon swimming in syrup. That carries through to the palate where it’s boosted even further by some rich fortified fruit flavours. You’ll get various other big stout characters coming though too – from chocolate to dark roast and even a touch of aniseed – but really it’s that maple sweetness which is prominent from start to finish, riding out any bitterness that lies beneath.

Unless you’ve a bona fide sweet tooth, tackling a bottle of The Mountie alone might make for a slightly ambitious evening. Perhaps a more sensible means of enjoyment is having a couple of snifters with a couple of friends – and a small serving of dessert, if you're game.