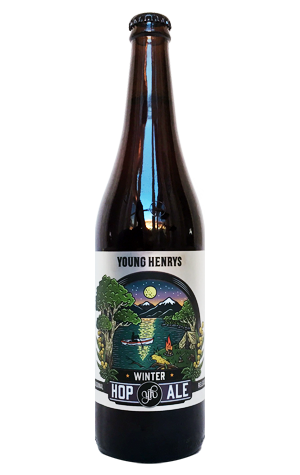 Last summer, Young Henrys gave one of its mainstays an overhaul. Hop Ale, which had already been through few iterations, was reworked into companion piece Summer Hop Ale via the cunning means of adding a mountain of fruity hops, lightening the malt base and creating something of a tropical fruit salad of a beer. Now they're trying something similar for winter.

Winter Hop Ale is a red IPA that makes a feature of West Coast US hops and adds a touch of rye malt to the mix too. Its redness is of the deep auburn sort, topped by a big, fluffy head, and the combination of specialty malts and those hops create what you might call a Venn Diagram of flavour and aroma characteristics. There's some ripe citrus and earthy hop characters on one side and fruit cake and treacly malt characters on the other. In the middle, there's red berries, while the rye adds a spicy lick to the drying hop bitterness. Certainly, while it has "Hop" in its title, this is a beer that's as much about the layers of malt, as you're likely to want given the season.