Beer Prancing Pony The Hunt for the Red Velvet 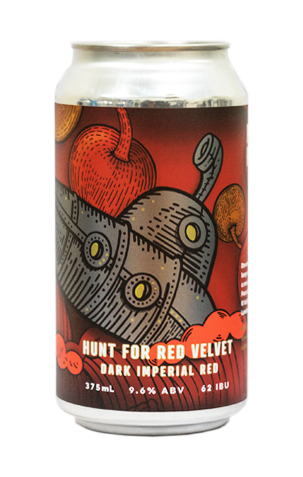 It's far from unusual for brewers to create something dessert inspired for GABS. Often, they'll load a beer up with all manner of vanilla, coffee, cocoa, fruit – you name it – to achieve their goal. But, for their 2017 entry, Prancing Pony aimed to achieve something rich and fruity without using anything other than the core four of water, malt, hops and yeast. That said, The Hunt for Red Velvet initially used two beers, being a blend of a fruity IPA and an imperial stout.

The beer – now tagged "dark imperial red" – has evolved over time and become an annual release when the mercury is taking a dive. It looks like a barleywine in the glass, and weighs in at that sort of strength too; think of their flagship India Red Ale on steroids and you're heading in the right direction. Sweet and a little sticky on one side – burnt caramel, some almond liqueur and booze-pickled red berries make up the aroma, while there's a herbal, perfumey hop character that floats to the top of the palate – and just about enough bitterness on the other side to keep this thick, sweet, boozy malt driven balloon of a beer from heading into the stratosphere.