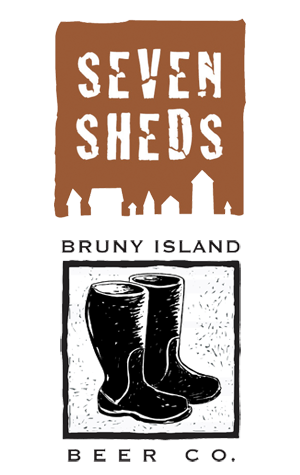 Tasmanian brewer Evan Hunter gets about. On various trips to the island since The Crafty Pint started out, we've met him making wash at Lark Distillery and brewing beer at Seven Sheds. He's turned out at Moo Brew and, at one point, ran a crowdfunding campaign to launch a brewing company that would specialise in unique, off kilter brews featuring lesser used ingredients from his home state. In the end, he joined forces with Bruny Island Cheese, where he's bringing many of those ideas to life.

And now he's been back where it all started, returning to the northwest of Tassie to hook up with his old mentor Willie Simpson, the beer writer turned brewer, hop grower, mead producer and fellow celebrant of the many wonderful things the thrive in the state's fertile countryside. Shortly after Willie and partner Catherine Stark launched Seven Sheds, Evan joined as their "tank rat" and, for this trip back to his alma mater, took with him some of the raw wheat grown on Bruny Island he's fond of featuring in his beers as well as a Belgian yeast strain and some Belgian specialty malts.

To that was added Cascade hops, grown at Seven Sheds for the first time last year. They'd harvested 22kg in March and used that haul along with Tasmanian malted barley from the Joe White plant 20 minutes away and some English malts. The result is Island Hopper, described by the brewers as: "Amber-copper colour [with] hints of caramel, clovey/phenolic yeast notes, a background of cumin and fennel [and] a firm, herbal bitterness [that] finishes with lingering dryness."

It's a keg only release launching on June 10 at Tom McHugo’s during Dark Mofo.