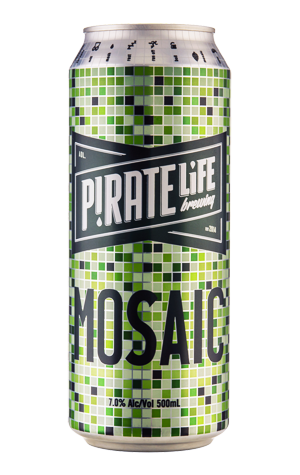 It is no secret that the Pirate Life crew love their hops. With rare exceptions, the hoppier the beer, the better the beer in their books. It's a tradition that continues with one of a pair of previously draught only beers that made a first appearance in 500ml cans for winter 2017. The Mosaic IPA was originally brewed for their second birthday beach party but proved to be so popular it was soon making its way through the brewhouse again and given the tinnie treatment.

It's a showcase for their all-time favourite hop variety (and many others' too), Mosaic. The malt bill was kept simple so the Mosaic could take centre stage, an opportunity it grabs with both hands, having been added in a typically generous volumes. The hops hit you as soon as the can is cracked, firing off the Mosaic's uniquely kaleidoscopic array of aromas: candied fruit, juicy mandarins, grassiness, berries. The hop flavours are full on too, but delivered with such balance there's little in the way of a banging bitterness, merely another American inspired beauty to add to Pirate Life's consistently impressive lineup.