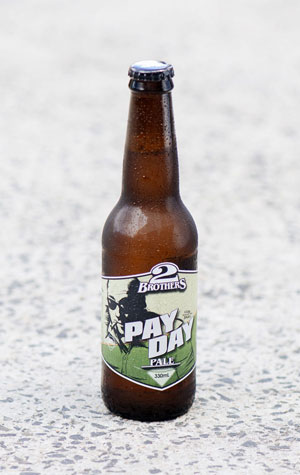 It took 2 Brothers far longer than pretty much every other brewery in Australia to add a pale ale to its lineup and, when Pay Day did finally arrive, it was after much trialling, testing and tweaking. And it paid off soon enough too, with the beer taking out the trophy for Best Australian Pale Ale at the 2017 Australian International Beer Awards.

Australian style pale ales are typically more reserved than their punchy American inspired counterparts and that's the case here. Pay Day pours very pale with a lasting foamy head and is as delicate as it looks. There are soft lemon citrus and stone fruit aromas, accompanied by light malt sweetness in a beer that's just as soft on the palate, with a barely perceptible balancing bitterness. You can understand why it impressed the judges too as it is clean as a whistle, if not cleaner.