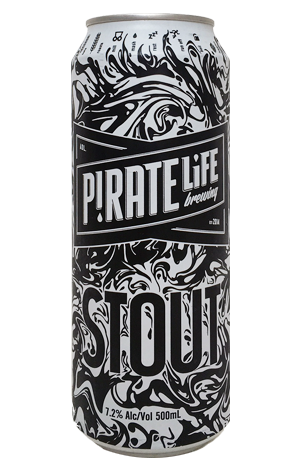 It's taken until tinnie number eight (or seventh equal given it's released at the same time as the Mosaic IPA) for Pirate Life to put a beer that isn't hop forward into cans. Sure, there have been barrel aged beers, a porter and a Berliner Weisse released in bottle or on tap, but now winter 2017 sees Stout join a lineup previously reserved for a series of pales, IPAs and a golden ale. They've switched the focus to dark malts in typically unreserved fashion: inside the eye-catching 500ml mass of swirls is a beer to gird your loins for the cold months to come.

Just as their hoppy beers show a respect and talent for US inspired pales and IPAs, here they display a respect for traditional British stouts. This is a beer that couldn't be much further from the triglyceride troubling sweet stouts that, year in, year out, line the GABS container bars; instead, Pirate Life delivers an experience centred around roasted barley, bitter chocolate malts and woody, earthy English hops. Oats are there too to soften the body of a beer that, weighing in at a notch over 7 percent ABV, sits in dry export stout territory.