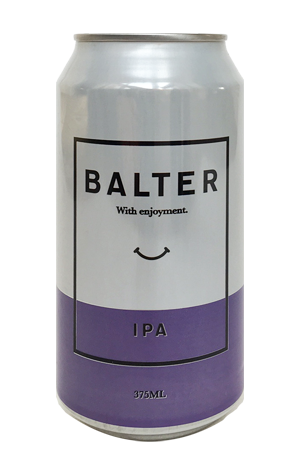 As beer launches go, Balter's unveiling of their IPA to the hordes in attendance at their Good Beer Week Tins of Glory event may take some beating. For said event, the Gold Coast based brewery team designed and built a large, glowing shuffleboard inspired table and invited guests to take part in a game en masse, using the tins of IPA they'd been handed on the way in rather than the usual discs, with the whole affair conducted in the manner of a wild game show.

The beer has now transitioned from shuffleboard prop to permanent member of the Balter range and is comfortably the biggest beer in the lineup, at 6.8 percent ABV and 72 IBU [International Bitterness Units, with 72 being on the high side]. Yet, it's also a beer that doesn't present as particularly boozy or, indeed, bitter – not that surprising given head brewer Scotty Hargrave's talent for delivering clean and balanced beers that make their way through awards competitions like trolley wielding contestants in Supermarket Sweep. Instead, there's plenty of hop aroma and flavour; we pick up blackcurrant and juicy fruits alongside some sweet, biscuity malts and a bitterness that's broad and slightly resinous. But what's inside the purple tins is so intermingled you're better enjoying its constituent parts as a whole than picking them apart.