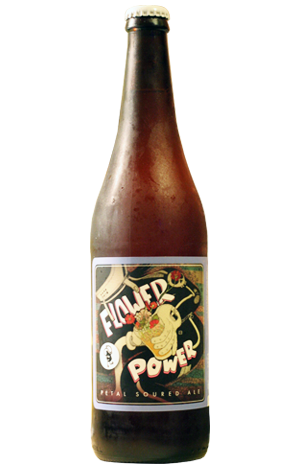 “It sounds awful. But it smells beautiful.” Such was the immediate response from the non-beer drinker in the room when first presented with the description, followed by a glass, of Shenanigans’ new beer, Flower Power.

It’s their 2017 GABS entry, which has since been bottled and sent into the wider world, and it’s a 3.5 percent ABV kettle soured wheat ale that uses next to no hops, instead making the most of the addition of a floral bouquet featuring jasmine, chamomile, rose, marigold, hibiscus and lavender. Within that arrangement it’s tricky to single out just one for particular emphasis but, taken together, the aroma is undeniably pretty. While Flower Power is, by design, a sour ale, it doesn’t offer a real puckering experience. For a loose comparison it has an almost rosé (as in "rose-ay" wine) feel about it, with dryness, acidity, and light fruit – all you're really missing is a pastel pink colour.

The Shenanigans guys have made a habit of making slightly unusual things come together in a good way, and using the power of petal sour they’ve done so again here. It’s also good to know that if the hop shortages get too severe, we can all still drink perfectly well – as long as the florists stay well stocked.

And other good beer stockists in NSW