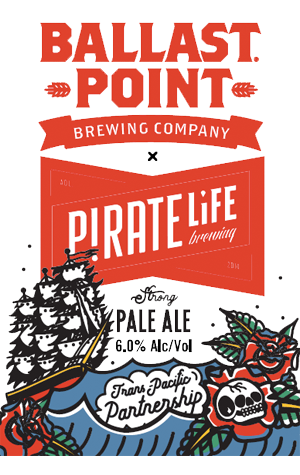 Given so much of what makes up Pirate Life is inspired by the beers of West Coast USA, there can be few more suitable collaborations for them to enter into than one with a West Coast US icon. Ballast Point was one of the trailblazers of the influential San Diego scene, growing from a small brewery at the back of a home brew store in San Diego to one that operates from several sites and was picked up by Constellation Brands in December 2015 for an eye-watering USD $1billion. And now they've made a beer with the rising stars from Adelaide.

The road to the collaboration started at the Beertopia Beer Festival in Hong Kong, where the Pirates ran into Ballast Point's worldwide sales boss Chris Roberts. He took a fancy to their IIPA and an idea was conceived. That led to Pirate Life's brewers hooking up with Ballast Point Speciality Brewer Colby Chandler while in the States for the Craft Brewers Conference earlier this year and the Trans Pacific Partnership was born.

Unlike the economic version, designed to give multinational corporations even greater power over government and society, this is much more desirable: a beer designed to overpower your palate with hoppy goodness. It's a 6 percent ABV American strong pale ale liberally hopped with US, NZ and Australian hops and finished with finger limes and coriander in the whirlpool. It comes with tap decal artwork from Steen Jones and is designed to celebrate "the collaborative nature that helped the craft beer industry grow to become what it is today".

And other select venues in SA, VIC & NSW