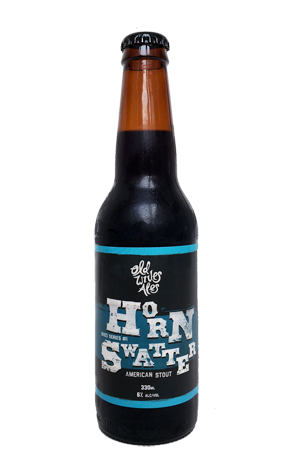 Almost by stealth, it seems, the gypsy foursome that is Old Wives Ales has five beers out in bottles. The most recent is the first in what they're tagging the Shed Series, with Horn Swatter an American stout in which they've ratcheted everything up like the temperature controls in the brew shed.

The description kicks off with the claim: "Blacker than Norwegian metal..." and it's one they waste little time living up to. Not only is it black as night but the dark malts have been layered in such a manner that you could be forgiven for not picking up on the "pants loads of citrusy, fruity American hops". Instead, this tarry number leads off with punchy bitter chocolate and roasted espresso, with the hops more noticeable via the gripping, resinous, lingering, earthy bitterness they deliver. Let it warm, however, and you'll find a bitter orange character coming through too, like an unexpected extra riff atop the thunderous metal cacophony already rattling your speakers.