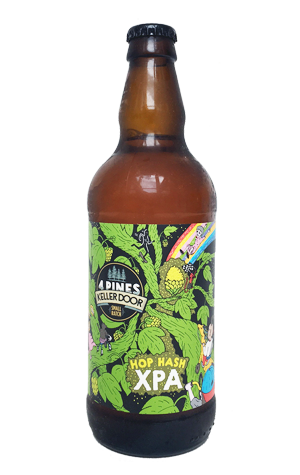 Hop hash is a new means, developed in the States, by which brewers can deliver an intense hit of the best bits of hop flowers into their beers. It's made up of the powder left over after masses of hops have been turned into pellets during harvest and small amounts made it to Australia for the first time following the latest American season. 4 Pines played around with some in an XPA and clearly liked what it did as they've now brewed the beer again and released it as their latest colourfully attired Keller Door bottled series.

The hash in question originated from uber popular hop varieties Simcoe and Mosaic and the brewers chucked in some pellets as well for good measure. All were added – after a pretty involved process – to the most gleamingly bright of golden beers, one in which any aroma or flavour contributions from the malt have been kept to a minimum in order that the hops can strut their stuff.

The brewery reckons it's all about stone fruit characters but we reckon the potent hop additions also fire off aromas of pine, nettles, gooseberry and even hints of the diesel character more typically found in some NZ hops. We picked up grapefruit as it warmed (not that we allowed it long to do so...), while there's plenty of bitterness too: lean, tight, dry and spicy.

Find it at 4 Pines venues then nationwide