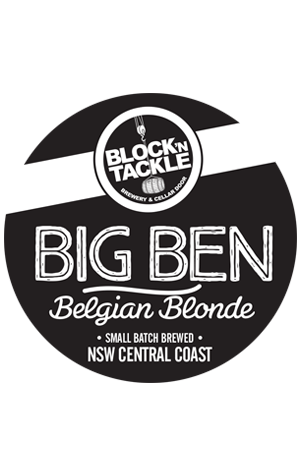 With the winter weather having settled in on the Central Coast, the guys at Block 'n Tackle have decided to release something that offers a little extra oompf and comfort to locals on these cooler days and nights.

Big Ben is a Belgian style blonde ale, so it's one where the emphasis is all on the yeast and malt. They've used a simple base consisting solely of Pilsner malt upon which the banana and fruity esters and spicy phenols of the yeast are able to shine. It's not a beer for hop heads as very few have been added; just a touch of Styrian Golding for some essential bittering. All up that leaves a beer with "a slight malty sweetness, a medium light body with high carbonation" and "a dry finish".

As with many Block 'n Tackle beers, Big Ben is named for a local legend of the shipbuilding industry that once thrived on the land where the brewery now stands; in this case it's one Benjamin Davis (who's done rather well on the attribution front as he has a couple of suburbs named after him too). As for being big, at 7.1 percent ABV it's a stronger beer than what the brewery normally makes. In fact, it's the second strongest they've ever released commercially, behind the considerably larger anniversary Russian Imperial Stout. And that, incidentally, should be due for release soon too. Winter drinking is looking good in Kincumber.