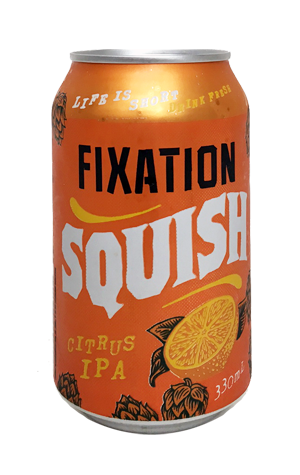 With so much attention focused on the haze craze surrounding New England style IPAs, one could forget another direction in which the increasingly broad IPA category has been heading: the addition of fruit and fruit juice. On a global scale, it's been San Diego's Ballast Point leading the way. Here, a brewing company whose co-owner was first really turned on to the wonders of West Coast IPA by a trip to San Diego back in 2010 (where Green Flash provided the epiphany of epiphanies) has been developing its own take on the style.

Fixation released a small batch of Squish on tap to coincide with Brewsvegas in March and now has returned with a refined version of the blood orange and white grapefruit enhanced beer – and popped much of this batch into cans too. We say refined as, if memory serves, the balance between fruit and beer has tipped slightly and welcomely towards the latter. Sure, the blood orange is first to leap from the glass/can, but its IPA-ness is more prominent than last time around – when it was good enough to register in our Best New Beers of 2017 – So Far poll. Perhaps the best way to think of it is to imagine the bitterness from the Mosaic, Citra and Amarillo hops being balanced by the citrus fruit instead of malt sweetness (obviously, all are at play but that's how it's perceived).

It comes in a can that brings back memories of a first childhood encounter with Sunkist out of a vending machine at Newark Airport 29 years ago and passes the belch test by conjuring memories of Orangina being swigged in the south of France even further back into prehistoric times. Our tasting notes end: "Clean, fruity, nice bitterness, good body, dangerous. Yum." Can't ask much more than that.

And limited amounts of cans landing at other good beer venues