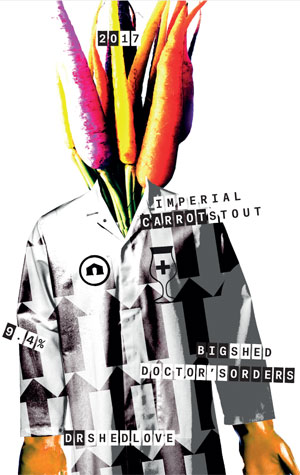 It's rabbit season at Big Shed Brewing Concern after Darren "Doctor’s Orders" Robinson responded to a "What's up, Doc?" and hopped in to help Jason Harris and Craig Basford create the 2017 vintage of the Dr Shedlove series. It's one of the – if not the – most unlikely of ongoing collaborations: every year a different root vegetable is used within a beer. For 2017, the trio decided to add 250kg of carrots to an imperial stout. The carrots weren't alone in finding their way into its black, murky depths: vodka soaked oak chips are featured too.

Being an imperial stout, Dr Shedlove is far from your typical morning carrot juice. For a start, it pours a jet black and sends forth aromas both sweet and a little roasty from its creamy, off white head. A thick, full bodied imperial stout ensues, with those roasted malts making an appearance on the palate before a creaminess takes over and candi sugar flavours finish things off. At 9.4 percent ABV, this year’s Dr Shedlove is a beer that could convince even Elmer Fudd to eat his carrots.