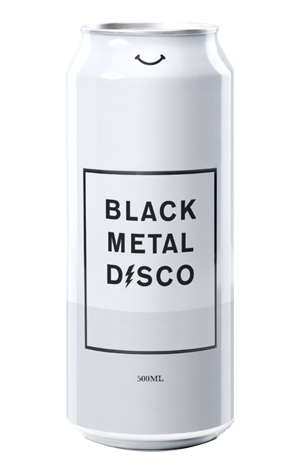 It's called Black Metal Disco, comes with a lightning bolt, a reference to thrash being played on a jazz flute and is the first brew from Balter to be released in a 500ml tin. So, is the moment they throw caution to the wind and abandon their practice of turning out finely balanced beverages in favour of something wild and gnarly?

First things first, Black Metal Disco is a stout and is a beer that some of you may have tried before. It appeared on tap at their Gold Coast brewery via their pilot system. Then appeared again and again due to public demand, with the odd keg popping up at special events around the country, before stepping up to the full brewhouse and into tinnies.

As for the liquid, it sits towards the creamier, sweeter end of the stout spectrum. The flavours and aromas come in various shades – presumably the inspiration for the paradoxical name – such as roasty, toasted nuttiness, dark and milk chocolate, a bit of espresso. And together they make for a nicely rounded drinking stout. So, have they thrown caution to the wind? No, but, seriously, what else did you expect?