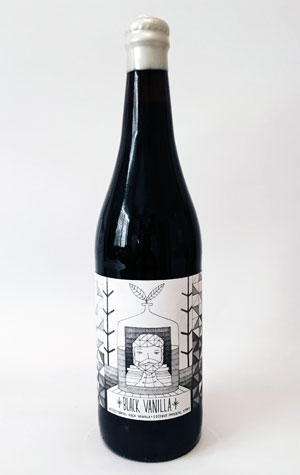 Eagle Bay’s annual collaboration with Mane Liquor and friends continues to warm the hearts, minds and mouths of drinkers with an ever increasing ABV. The project’s vision this time around was to create a midwinter black barrel aged beer to a lineage in which previous vintages have included a barrel aged black IPA and whiskey barrel aged imperial coffee porter.

Black Vanilla completes this dark, tannic journey by taking the form of a whiskey barrel aged vanilla and coconut imperial stout. Some of the original imperial stout spent three months in Whipper Snapper whiskey barrels which have lightly imparted their DNA before being blended back into the base beer. This was then dosed with giant tea bags of vanilla and freshly toasted coconut. The result is an incredibly coconut forward beer whose richness dances with vanilla and milk chocolate. Whiskey is subdued; however, the barrel tannins dry the bitter chocolate finish. Faint red berry notes also appear from the inclusion of a touch of fresh Shiraz barrel aged beer.

With this release, celebrated artist Kyle Hughes-Odgers completes a trilogy that began with Black & Tannin’s girl leaving the brewery with a bottle. Last year’s Forest For The Trees found a group – seemingly the collaborators – with eyes closed, deep in the forest and now the original bottle sits assuredly on a barrel plinth with an older giant’s clear gaze. Whatever is to be interpreted from this artwork, it’s surely one of the most interesting and collectable beer projects in Australia.

Black Vanilla, t-shirt and bottle gift packs and a very limited amount of back vintages are available from Mane Liquor and Eagle Bay Brewing Co.