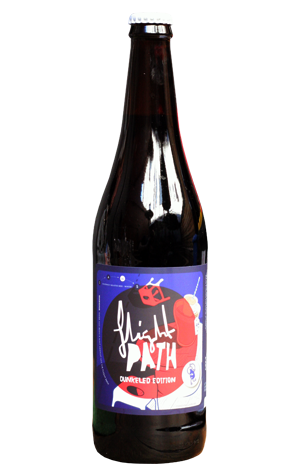 As part of a re-jigging of its seasonal releases, in 2017 Shenanigans put a hold on brewing the usual autumn beer, Flight Path – a red ale infused with coffee – in order to make space for the much-loved chilli beer, Hoppy Gonzales. While a generally popular decision, it did leave a certain emptiness in the roster. So, when it came to lining up their usual winter beer, the Malt Assault dark lager, they figured they might as well do Flight Path as well. But in the one beer. So it is that we have Flight Path: Dunkeled Edition.

The base reflects Malt Assault with a kind-of-dunkel, kind-of-altbier maltiness and, if memory serves, a herbal hop element similar to that featured in the original. From the Flight Path side, the difference is the coffee: while they’ve stuck with the same blend from Marrickville's Double Roasters, they’ve opted for cold drip rather than beans. And that combines with the malt in a very cohesive way, the coffee character shaving away the edges of the sweetness and ensuring it keeps drinking nicely all the way down. Part autumn, part winter release, this medley of a beer is ideal fodder for these increasingly confused seasons.