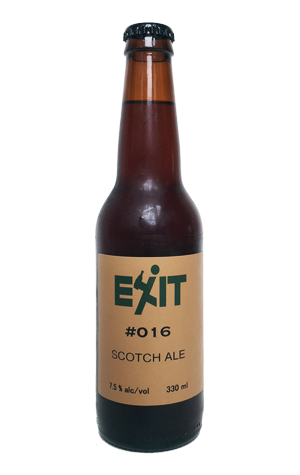 Way back in 2014 (yes, we thought Exit had been around longer before checking dates...), Exit Brewing followed up a well received first release, a saison, with a sophomore beer that made it clear they were here to brew what they wanted rather than what they thought the market – at that point, gobbling up golden ales like they were manna from heaven – wanted. #002 was a Scotch ale that held little back. And, now, having added a core range, residency with their mates KAIJU! at a brewery in Dandenong South and their own bar, Uitgang, in Richmond, to the mix in the meantime, the Scotch ale is back as a winter seasonal release.

The peated malt ensures smokiness leads the charge, bringing a maritime, iodine like quality with it, but there's an accompanying malty sweetness as well as the fruitiness common in many British ale yeasts too. There's a pretty hefty drying, earthy bitterness to keep the sweetness in check in what is essentially the same beer as #002. Essentially the same but, if memory serves, a little different too; it feels tighter and smoother than its ancestor, unsurprising now they've got three years of this commercial brewing malarkey under their belts.

And select bottleshops in Victoria