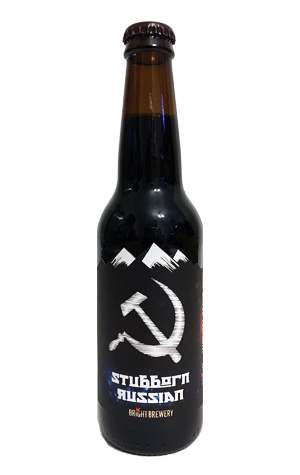 The 2016 vintage of Bright's Stubborn Russian Imperial Stout was the first time the brewers had worked with near neighbours Bright Chocolate. Clearly, both parties were happy with the outcome as they got the gang back together for the 2017 release. This time around, the chocolate makers selected Tanzanian cacao nibs and husks, which were added to the mash and then again via a “dry hopping” technique as the beer was maturing. The beer also nudged up a little in potency, moving from 10 to 11 percent ABV.

Despite this step up in booze content, if memory serves correctly the 2017 Stubborn Russian is a smoother affair. There's dark chocolate and a touch of espresso on the nose and, while the beer isn't as fulsome as some of this ilk, it has a persistence that keeps the flavours lingering long after the beer has departed your palate. There's no noticeable heat, and even the bitterness is of a bitter chocolate sort rather than roasted or hop driven – little wonder, then, it fared so well in our imperial stout blind tasting.