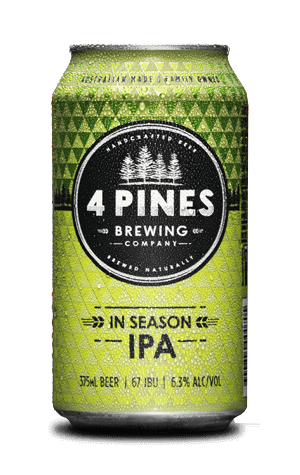 The 4 Pines series of In Season IPA releases has been going long enough now that Crafty Pint readers are probably well aware of what it entails. In case there are any that aren't, in short, the brewers create a new IPA every few months featuring hops from the most recent harvest, be that north or south of the Equator. Since release number 4, they've also been sending the beer out across Australia in tinnie form.

Last time around, it was American hops taking centre stage; this time, they went plundering closer to home with number 5 featuring Australian hops from Victoria and Tasmania. More than that, it features most of the varieties available from Hop Products Australia: Enigma, Vic Secret, Galaxy, Helga and Australian Willamette.

As with previous releases, it's a glistening golden affair but, whereas the hop character in 4 was tight, sharp and potent, here you're first hit with much fruitier, rounder, broader hop aromas from the off. The brewery's tasting notes say mandarin and citrus but we reckon, with so many hop varieties added to the mix, there's more than that going on – so much so, indeed, that individual palates will probably pick out their own particular fruit characteristics, be that apricot, pineapple, grapes or something else. The beer gradually coats your mouth too, leaving a sticky, resinous bitterness that's persistent without being aggressive – at least, not aggressive for an IPA.