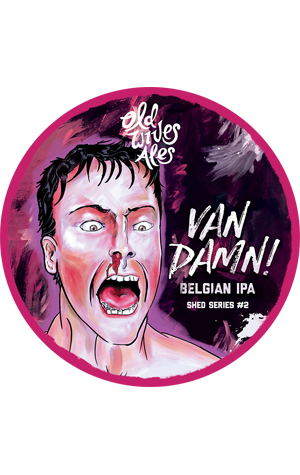 Old Wives Ales' Shed Series of one-off releases kicked off in June with Horn Swatter, the hoppy American stout brewed in honour of brewer Shannon Brooks' old man. The second in the series – draught only this time – comes with a nod to another old man, albeit not one with any familial ties to the Melbourne foursome. This time, it's the Muscles from Brussels, Jean-Claude Van Damme that is both inspiration and decoration – the decals feature his bloodied face. Why? Because it's a Belgian IPA they say is "amped up, ready to smash your taste buds like cheap plywood".

There's a bunch of specialty malts at play to give it its rich amber hue and the "smashing of your taste buds" comes courtesy of a stack of Australian Vic Secret and Ella hops. According to our man Will Ziebell, who tasted it on his tour of Bendigo On The Hop, he picked up "melon with some citrus from the hops mixed with a clove like spiciness from the Belgian yeast... it was what you'd expect a Belgian IPA to do." Just as you know what to expect with JCVD.