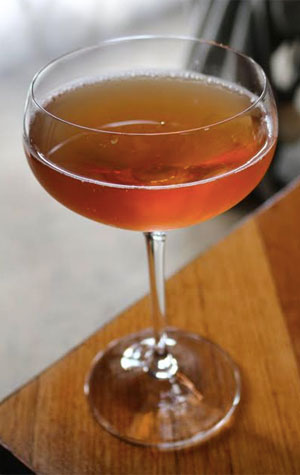 A visit to the brewery this week confirmed just how much is on the go at La Sirène's "urban farmhouse" brewery. Step away from their already diverse core range – the hoppy as anything Urban Pale and the array of saisons and other farmhouse style beers, plus Praline, of course – and there's all manner of paths being trodden. There's the monthly single hop saisons in kegs, various short run barrel aged and blended releases, beer-wine hybrids and spontaneously fermented ales at various stages of development.

The most recent of the barrels to be emptied is one they've tagged Copper & Vine. It started out as a saison, which was put into premium French oak for 24 months with whole bunch Pinot Noir grapes before the brewers were inspired to put it into kegs and release it by Seddon's Copper Pot. There's very little around of a beer described by La Sirène as "elegant and subtle" with "a delicate copper hue and soft oxidative Pinot Noir characters".

And select beer venues around Melbourne