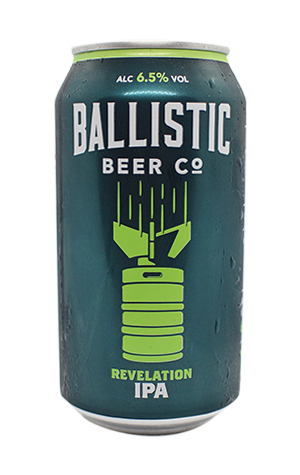 With so many taps to play with, chances are you'll have a few IPAs to pick from when you call in to Ballistic's home. One that's always there is one of the beers with which they launched: Australian Psycho, albeit going by the name Revelation IPA since early 2019 in recognition of the connotations the original title can have with regard to mental health.

Like the West Coast US IPAs it's inspired by, it's all about delivering as much in the way of hop aroma, flavour and bitterness without letting anything else get in the way. "Bucket loads" of local hops are added in the kettle before the beer is dry-hopped twice with more than half a kilo of hops per hectolitre [in layman's terms: "A lot."] The result, as they put it, is a "dry, aggressively bitter tropical fruit bowl that's a godsend for hop heads but is a mainstream lager drinker's worst nightmare."