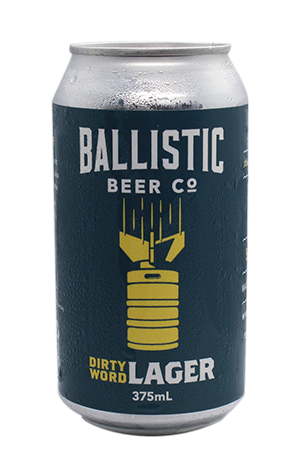 For some years, there's been talk about a revival of lagers and pilsners within the craft beer world. One of the driving forces behind the rise of the industry was a desire to rebel against and offer alternatives to the mainstream pale lagers that had a stranglehold on the world. Now that an alternative was becoming established, the argument went, there was less need to rebel and, actually, well made pale lagers (think the helles of Munich or the pilsners of Bohemia) were pretty bloody delicious in non-commoditised form.

That said, we're yet to see much evidence of a storming comeback for lager in Australia's craft beer industry; sure, there's some good pilsners out there, a few hopped up IPLs but also some lagers added to a brewery's lineup because they feel they need one for drinkers not ready for something bigger. With Dirty Word, however, Ballistic set out to create what they term a "craft lager" – something that is very much a traditional lager, but done very well with quality ingredients. Within months of launch, it had collected a gold medal at the Australian International Beer Awards, suggesting Lachy had nailed his brief.

The beer itself melds the soft spicy characters of Old World noble hops and hints of the livelier fruity characters of New World varieties with that familiar grainy malt character from good European lagers, wraps it all up with a tight bitterness and sends you away thinking: "Maybe lager isn't such a dirty word after all."