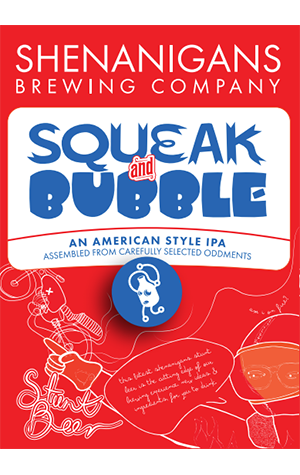 As is the case for many people at this time of year, the guys at Shenanigans have had a bit of a spring clean. And what they discovered when they swept out the contents of their cool room was that they had enough ingredients (not picked up off the floor, presumably…) to create something they'd be happy to label and release as their latest in their Stunt Beer series. It’s thus been branded Squeak & Bubble and is an IPA using Australian Topaz, US Chinook and Simcoe lupulin powder. They cobbled together enough malt to give it the strong bones required to hold it together, with the beer weighing in at 7.2 percent ABV so packing a bit of a punch.

On a slightly different "punch" theme, Shenanigans has also just brought out the 2017 incarnation of its hibiscus and jasmine IPA, Red Sky. As ever, it’s a resplendent creature and brings to mind the first time we had it, back in 2014, where it was beautifully juicy with striking aromas and flavours of peach and nectarine and went on to feature in our best new NSW beers of the year. It’s been a favourite for many ever since and there’s a strong case to argue that the 2017 release is the best yet. As the weather warms and the flowers begin to bloom, this is perfect springtime fodder, especially as they’ve been nice enough to pop it into cans too.