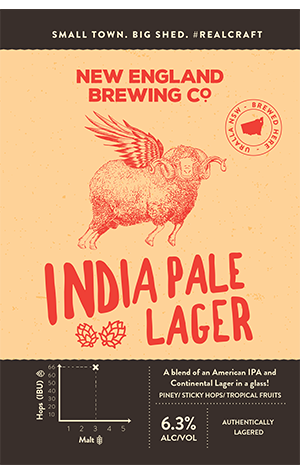 As they waited for their new canning line to be installed, tested and readied for action, the brewers at New England had to do a little juggling of their normal brewing schedule. The ideal scenario was to shift things around so the first beer destined for cans would be ready at just the right time to transfer from the tank, which meant they had to hold off brewing it. And that, in turn, resulted in them having a little extra time and tank space to fill. This India Pale Lager is what they filled it with.

The style itself is a mash up of New World IPAs and Old World lagers; in other words, a highly hopped lager. This particular interpretation uses US Cascade and Centennial hops, some Aussie Enigma and a slight outlier in East Kent Goldings from the UK. With those sitting atop a simple malt backbone, on the flavour front you can expect pine and tropical characters coming through with aplomb. That the hop characters stand out so much is also thanks to the use of a German lager yeast which means there’s less competition with flavours as might be the case with an ale fermentation.